Newsroom   /  How AT&T, the Index’s top performer, extends the ladder of opportunity 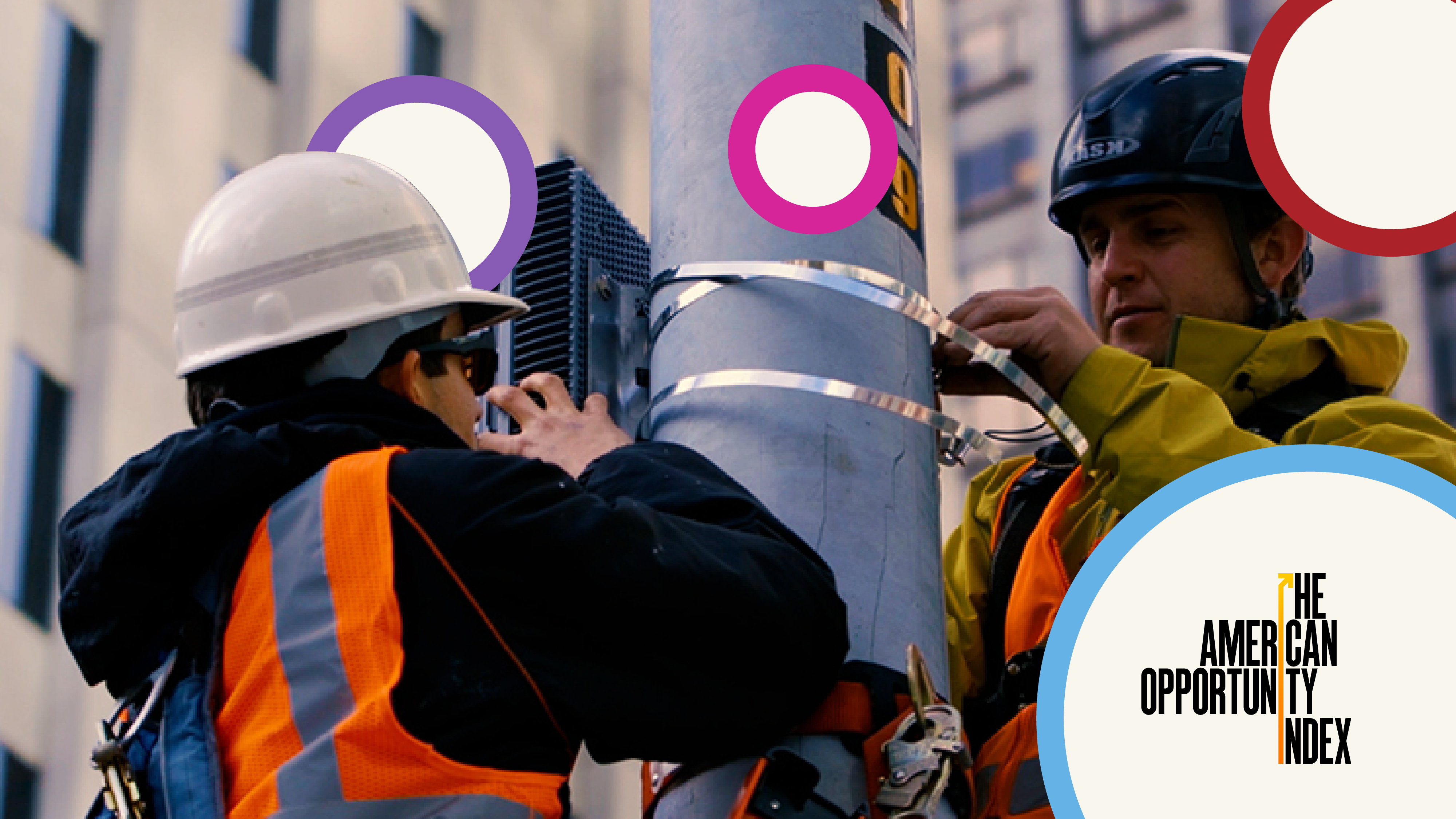 How AT&T, the Index’s top performer, extends the ladder of opportunity

An employee’s journey from call center to executive office illustrates a key Index conclusion: Where you work matters.

For so many people, the first job is a rite of passage—an introduction to new social circles, expectations of personal responsibility, and a freedom that comes with a bit of spending money. Demetrus Hayes is no exception. A gregarious sort even at 16, he enjoyed the social environment of a supermarket while bagging groceries in Gulf Shores, Alabama, and quickly rose to clerk. But then the nearby shoe store beckoned, and he decamped to sell sneakers. “I did that one purely for the discount,” he remembers with a laugh. That was 1994. It was the last time Hayes had an employer not named AT&T.

“I started answering the phone in the call center. But I always knew I wanted to do more, and it’s been a wide-open green field of opportunity ever since.” – Demetrus Hayes, AT&T Vice President & General Manager, Gulf States

Hayes’ girlfriend became pregnant, so he began searching for a more permanent position as a means of helping raise their daughter. “You always think about utilities, the government, and the phone company as being very stable,” he says. After failing a typing test while interviewing at the regional utility company, he tried AT&T. “I started answering the phone in the call center. But I always knew I wanted to do more, and it’s been a wide-open green field of opportunity ever since.”

His truncated retail experience was enough to vault Hayes into a sales position at an AT&T store. He became manager, then regional manager, and, after a lateral move to handle small-business accounts, he was promoted to sales director. “Within 10 years, I went from sales director to assistant vice president,” Hayes says. What started as a high school job evolved into a successful career. These days Hayes is vice president and general manager of the Gulf States region with oversight of nearly 10,000 employees and contractors.

There’s no question Hayes, in the face of adversity, parlayed grit, talent, and ambition into prosperity. But his journey from a call center to a vice president’s office was only possible because of an ever-extending ladder of career growth at AT&T, the top-performing company on the American Opportunity Index for 2022. The overriding conclusion of this big-data project is as simple as it is powerful: Where you work matters.

For Hayes’ career development, AT&T has been the perfect match. The company welcomed his ambition and provided the environment that accelerated his trajectory. It’s a case study in the profound impact that corporate practices and culture can have on a career. AT&T offered a pathway for Hayes to advance without a college education, and when he expressed interest in pursuing a degree in business administration from the University of Phoenix, the company paid for his studies. Hayes became the first among his extended family to receive a diploma.

The American Opportunity Index measures how well the 250 largest U.S. public companies are doing at creating economic mobility for their workers, drawing from the real-world outcomes of employees in roles open to non-college graduates. The Index measures each firm along three dimensions that are key determinants of opportunity creation: access (workers need to be able to get on the ladder), wage (earn enough to stay on the ladder), and mobility (move up the ladder).

The Index recognizes top performers in these five models because there is no single model of opportunity. The drivers of employee advancement are uneven and depend on a company’s structure, culture, and even its business model. What’s more, generating opportunity requires a firm to embrace at least two of three core dimensions: access, wages, and mobility. The data analysis clearly shows that most companies are delivering well for workers in at least one way. Two-thirds of companies in the Index rank in the top 50 on at least one model. But every company has work left to do. No company appears as a leader in all five categories.

Southwest Airlines and Cisco Systems appear in four. So does AT&T. The company’s performance is undoubtedly aided by the diversity and reach of its business. With a sizeable retail operation, where Hayes has achieved great success, and a plethora of technical support positions, call center operators, and an extensive corporate headquarters with the requisite support staff, AT&T offers a lot of open doors on the ground floor. “There’s never a day that we’re not hiring,” says Angela Santone, AT&T’s senior executive vice president of human resources.

“Less than 5 percent of our positions require a college degree, so we really do look for skill sets and experience first.” – Angela Santone, AT&T Senior Executive Vice President, Human Resources

But AT&T’s leadership is not merely a product of its business model. The company actively and continually encourages the rise of its employees. “The company invested in training and mentorship and guidance at every step of the way,” Hayes says. “Everything I’ve done at the company, I was taught.”

Santone says Hayes’ trajectory is fairly common at AT&T, citing people on her own staff in Dallas that have traveled analogous paths. “Less than 5 percent of our positions require a college degree, so we really do look for skill sets and experience first,” she says. The company, she notes, is on track to hire 20,000 frontline workers by the end of the year. “We invest millions of dollars in training,” she says, “and we have a culture of perpetual learning.”

Beyond its tuition assistance program, AT&T also offers the chance to get “nanodegrees” in skills such as data analytics and machine learning. The company offers apprenticeship programs in fields including network engineering and hardware tech. And while a lot of companies talk about the importance of diversity, equity, and inclusion, AT&T is investing heavily to bring people of color into its ranks of employees and leadership. Almost 20 percent of AT&T employees and nearly 14 percent of management are Black. The company also is a founding member of OneTen, a program focused on providing a million Black people with well-paying jobs.

AT&T also systematically explores new wells of talent. It actively recruits “second chance” workers, who have criminal records, and is developing community college partnerships. “We’re looking at how we can create training grounds, where the community colleges do the training and the students transition to us,” she says. “I think that’s an under-tapped marketplace for us.”

In an internal survey, 85 percent of AT&T employees said they intend to stay with the company for at least the next 12 months. Which comes as no surprise to Hayes. “The scope of work that AT&T offers is so broad,” Hayes says. “If you come in with a good attitude, you’ll develop skills. The company is always trying to help you prepare for the next role and doing a lot of rotational assignments.”

Asked whether he feels a sense of pride for all that he’s accomplished in his career at AT&T, Hayes is effusive. “Oh, I do. I absolutely do, but I think I’m more proud of my daughter,” who recently started studying for her MBA, he says. “She’s following in my footsteps—but doing me one better.”

For U.S. Bank, investing in workers without a degree yields high returns

To fill talent needs, employees are re-recruited into new roles, enabling them to grow and evolve their careers.